The Appellate Advocacy program is designed to give second-year students a chance to prepare and argue an interrelated question of law and fact in an adversarial setting. In September, advocates begin a ten-week process of researching and brief writing that culminates in oral presentations of their arguments. The records and bench memos used in Appellate Advocacy I are generated by the Moot Court Executive Board of the previous academic year in conjunction with a member of the faculty. Each advocate will receive a case record of the lower court’s proceedings and will work in two-person teams representing either the appellants or appellees. Each student will be assigned one issue to brief and argue. Briefs are typically 14 pages long (of which, each advocate must write seven pages). Oral arguments consist of arguing in front of a panel of three to four judges. The panel is typically comprised of two student judges, one faculty judge, and one visiting judge (a practicing attorney or judge). Those advocates with the highest total scores will have the opportunity to participate in the spring competitions (Van Oosterhout-Baskerville and Jessup Competitions) the following semester.

The Van Oosterhout-Baskerville Domestic Competition was established in honor of Richard Baskerville, a 1959 University of Iowa College of Law graduate, and Martin Van Oosterhout, a 1924 University of Iowa College of Law graduate and former Chief Justice of the United States Court of Appeals for the Eighth Circuit. Participation in the competition is restricted to the top 32 advocates of AAI who express a desire to compete in a domestic law competition. This competition is designed to sharpen the skills of the student advocate. Each advocate will write 14 pages for his or her portion of the brief and will participate in four oral arguments. Advocates argue not only the issue and side on which they write their briefs, but also the other three sides of the problem. That is, advocates argue four rounds, a different side each round: on-issue/on-brief, on-issue/off-brief, off-issue/on-brief, and off-issue/off-brief. The top four scorers in the initial rounds will be selected to argue in a final round before a respected panel of jurists. The top six advocates of the domestic competition will form the National Moot Court Team in the fall semester of the following academic year. In addition, the two top advocates and the two top oralists (those with the highest oral argument scores) will have the opportunity to perform oral arguments before the Iowa Supreme Court during the College of Law’s annual Iowa Supreme Court Day during the fall semester.

The Moot Court Board consists of approximately 16 student judges (depending on class size) and an executive board consisting of approximately seven members. The Moot Court Board operates under the guidance of a faculty advisor. All advocates successfully completing AAI and any spring appellate advocacy program (i.e., Domestic or Jessup Competition) are eligible for election to the Moot Court Executive Board (i.e., including position of: chairperson, vice-chair positions, domestic competition coordinator, AAI coordinator, Supreme Court Day coordinator and Jessup coordinator). Students who have successfully completed AAI are eligible to become student judges. Student judges are responsible for advising student advocates on their brief writing and oral argument preparation in AAI and the Spring Semester Competitions. Student judges also judge and score student advocates’ oral arguments and briefs in these programs. Selection to all positions is made by the current Moot Court Executive Board based on the student’s participation in Moot Court programs, personal interviews, and an editing sample.

In the fall of each year, the College hosts the Iowa Supreme Court on the University of Iowa campus. Oral arguments in a moot case are presented to the Supreme Court by third-year students in the Levitt Auditorium, an event that is open to the public. The evening following the event, a number of faculty members host receptions at their homes for the justices, attorneys, and students. These receptions provide an opportunity to visit informally with members of the court, and all students should plan to attend. Students also are welcome to help organize and plan the day's activities in conjunction with the Iowa Student Bar Association. 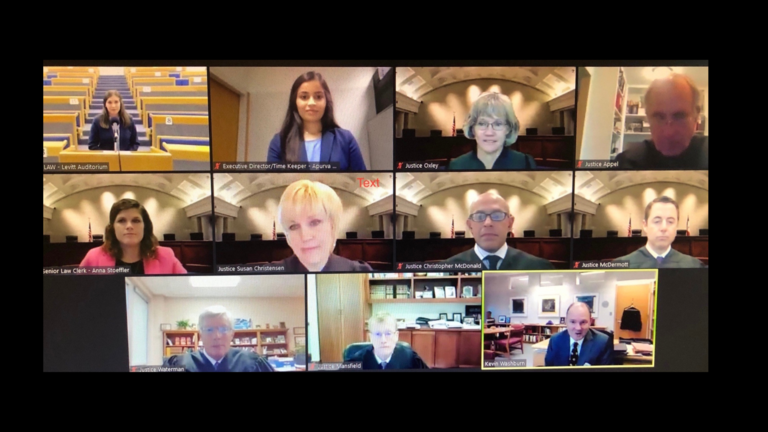 Monday, September 14, 2020
Written by
Adam R. Lorenzana
Every year since the inaugural Supreme Court Day was held in 1928, talented Iowa Law students have argued in front of Iowa Supreme Court Justices during Supreme Court Day. This year it was virtual.

Trial Advocacy is a student-run, faculty-supervised program that provides opportunities for students to develop and refine skills used in the preparation and trial of civil and criminal cases. Students are "on their feet" during most class sessions, practicing the arts of voir dire, opening statement, direct and cross examination, introduction of exhibits, use of expert testimony, and closing argument. The course culminates with a full-scale trial, from the filing of pre-trial motions to the rendering of a jury verdict conducted by student co-counsel before a visiting Iowa judge and jury of lay people. Students receive extensive criticism on the effectiveness of their classroom and final performances, and all class sessions are videotaped for review and critiqued by instructors and fellow students. Trial advocacy classes are usually taught by adjunct professors, themselves practicing trial attorneys, and a board of third-year students provides administrative and critical aid. Demand for the class has grown to the point that, in addition to offerings during the academic semesters, an intense six-day version of the course has been developed for interim sessions, so that approximately 110 students may enroll in trial advocacy classes each year. Inclusion is determined by lottery.

The Stephenson Trial Advocacy Competition is a competitive version of the full trials that complete the semester and intersession trial advocacy courses. The competition, which began in 1984, is named after Judge Roy L. Stephenson, an esteemed judge of the United States District Court and the United States Court of Appeals for the Eighth Circuit, and a 1940 graduate of the UI College of Law. A fund to provide for this competition was established by Judge Stephenson's former law clerks. A limited number of law students who have demonstrated superior ability in advocacy during the trial advocacy courses participate in a week-long series of mock trials judged by local members of the bench and bar. The final round of competition is judged by federal judges and Iowa Supreme Court justices. The competition, which takes place in October, culminates in a banquet where awards are presented to the winning participants and to the best litigator. Individuals selected from the competition represent Iowa at national trial competitions in the spring.