The Intellectual Property (IP) Advocacy Moot Court teams at the University of Iowa College of Law once again swept the regional competition in Dallas this past February, taking first and third place overall in the Trademark division.

The winning team, composed of Ashley Dehaan and Josh Grant, received an award for writing the best brief. Additionally, Madison Murhammer Colon and Bernadette Nelson who placed third were awarded best oral argument. This was the first moot court competition for all of the individuals on Iowa’s teams, however, their extensive preparation led by Professor Christina Bohannan and attorney Kelu Sullivan of Iowa City proved to be a testament to the college’s legacy in such competitions.

Iowa Law began competing in IP moot court competitions in 2009 as the field began to grow with the onset of technology. The necessity for advocating ownership of assets that are created and exist in a digital space is what led to student interest in participating in such competitions. Professor Bohannan spearheaded the effort by taking the initial interest and building the IP Advocacy program to be accessible to all students of varying interests.

Nelson, a current team member, stated that although she had little experience in IP law she was excited for the opportunity to work under Professor Bohannan. “She has always been a great role model in terms of being a professor who’s doing a lot of things and being very involved,” Nelson says. “She’s also just a great ear to help with any kind of decision-making process and law school.” 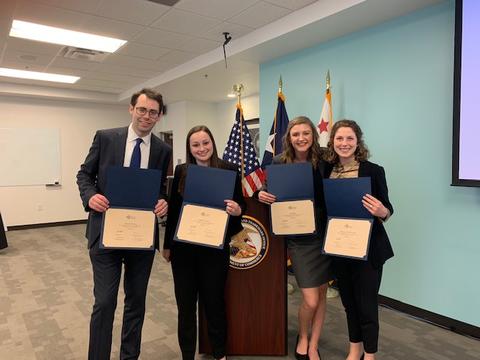 Other team members such as Grant and Murhammer Colon were attracted to the legacy of the success that Iowa Law has in IP law as Murhammer Colon noted that “One of the aspects that drew me to Iowa Law was its strong IP program, specifically the success of the moot court program.” Murhammer Colon also recalled her first visit to Iowa Law where she met Professor Bohannan. “When I visited Iowa Law, Professor Bohannan discussed the IP Advocacy program and its success, and I wanted to participate ever since that visit.”

The IP teams consistently place first or second in the regional competitions and have competed at the national level in the Patent and Trademark divisions. Professor Jason Rantanen, the director of the Innovation, Business, and Law Center, spoke on Iowa’s established reputation in the field stating that “The core of the program has remained the same for the last decade, a period during which it has achieved consistent success.”

The IP Advocacy teams are composed of a Patent and a Trademark division. Each division has two teams composed of two members who are responsible for writing a brief and preparing an oral argument. In practice, the Iowa teams often compete against each other and are presided over by local judges to prepare for the upcoming competition.

The time spent together working on briefs and preparing arguments leads to a unique sense of teamwork among the participants of the IP teams. Current team member Grant suggests that because of this culture “Many former IP Advocacy students offer to come back and assist as practice judges. It speaks volumes that so many former students, now attorneys, are willing to spend time helping the program.”

Due to the COVID-19 pandemic, the winning team from Iowa Law was unable to proceed on to the national competition in Washington D.C. this year. Despite the abrupt ending to their season, Professor Bohannan was incredibly proud of this year's team.

"The students consistently inspire me with their work ethic and dedication to the program,” she says. “It is always a highlight of my year to see just how far the teams come with their arguments and briefs. It is bittersweet to graduate our 3Ls but I always look forward to hearing about their new jobs and experiences after moot court. Win or lose, they are a pleasure to work with and I have no doubt they will find success in whatever they set their minds to." 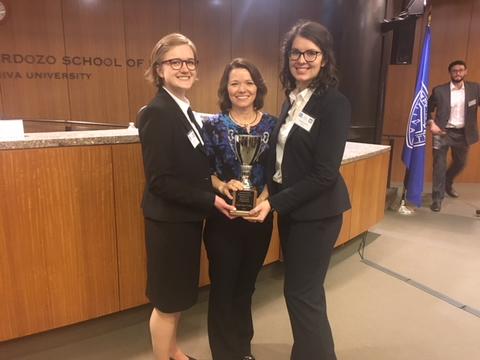 Molly Hill is a Student Employee for the College of Law in External Relations. She majors in English Literature and writes and edits alumni news content. Molly spent a year abroad studying British Literature at Oxford University and will graduate from the University of Iowa with Honors in December 2020.