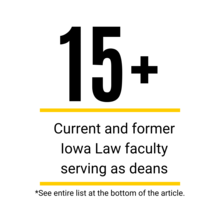 To prospective students Iowa Law is well-known for its small class size, legal writing program, and job placement figures. To the larger legal education community, Iowa Law is recognized for its ability to identify and attract world-renowned legal scholars to its faculty. It is not uncommon for those scholars to be leaders in their fields and beyond. That ability for Iowa Law’s community to foster leadership skills has resulted in a number of faculty members becoming leaders at law schools across the country and earned Iowa Law an informal reputation of “Law Dean School” along the way. 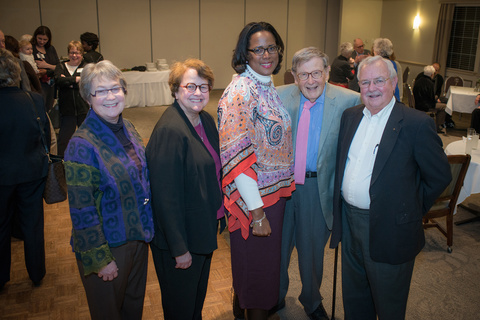 Dean Raymond reflected, “My time at Iowa Law showed me there was a rich pathway to leadership as an academic administrator. My work as a leader in campus faculty governance and my opportunity to work closely with some great deans led me to see that as an exciting way to broaden the impact I could have on students, alumni, and the legal system.”

Iowa Law’s informal recognition as “Law Dean School” traces well before these most recent appointments and retirements. Iowa Law had two longstanding homegrown deans who emerged from its faculty, Deans Ladd and Hines. Mason Ladd served as dean of Iowa Law from 1939 to 1966, after 10 years on the faculty, and Bill Hines was dean from 1976 to 2004, after serving 14 years on the faculty. Together, Ladd and Hines served as Iowa Law’s dean for 55 years. Around the same time, Sandy Boyd moved from the Iowa Law faculty—where he’d taught since 1954—to become the president of the University of Iowa in 1969, serving until 1981. Leadership skills are prized at Iowa and it is a place to cultivate leaders. 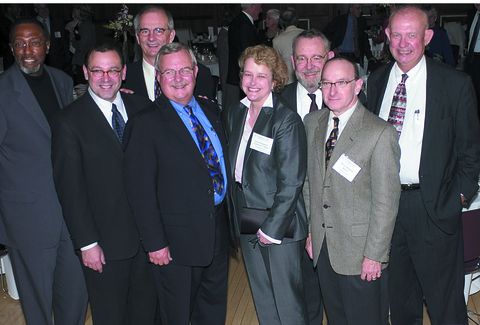 "The Iowa Law faculty was loaded with leadership talent throughout my long tenure as dean" Hines says. "This abundance of leadership talent was a great boon to me and to Iowa Law.  I regret, however, that the length of my deanship blocked so many outstanding faculty leaders from the chance at serving as Iowa's law dean, seven of whom left Iowa for other law schools to establish their success as deans."

Some faculty have served as deans and then returned to Iowa as faculty, including Shelly Kurtz (Florida), the late Randy Bezanson (Washington & Lee), and our own Carolyn Jones, who graduated from Iowa Law, taught at Iowa Law and became dean at Iowa Law, before returning to the faculty.

Iowa Law has also been part of the path of several significant academic leaders. These include Devon Carbado, Vice Chancellor at UCLA, who began his career as a Faculty Fellow at Iowa Law; Dennis Shields, the Chancellor of the University of Wisconsin-Platteville, who graduated from Iowa Law and became ran the admissions program for several years, and Marcella David, the Provost of Columbia College in Chicago, who began her career at Iowa Law.

The unique distinction of producing great leaders is a testament to the quality of the faculty at the school. Our current dean offered his insights about this remarkable institutional trajectory, “Our faculty is very collegial and that kind of environment is good for the development of students and faculty. Collegiality helps younger scholars develop wisdom and good judgment, forming them into natural leaders.” said Dean Washburn.

Iowa Law is proud of the leaders who have come before and looks forward to those who will come next.

Current and former Iowa Law faculty who have served or are serving as deans of other law schools and in other academic leadership roles include:

Iowa Law alumni who have served as deans of law schools and in other academic leadership roles include: