Loveliest Books in the Law Library 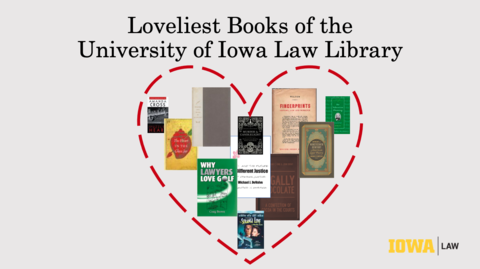 Great writing and great libraries are created by those with great passion.

The remarkable collection of our Law Library, which includes this selection of “loveliest books,” owes its breadth and depth to the passion and vision of bibliophile Professor Arthur Bonfield, who served as the Law Library’s Director from 1985-2014.

We hope this list sparks curiosity and, dare we say, passionate reading.

This biography is a part of the series Lives of Australian Chief Justices. It commemorates the distinguished career of Tasmania’s Sir Valentine Fleming.

Fleming was an English barrister of Irish descent and education. He arrived in Hobart as the Insolvency Commissioner. Although “keeping generally aloof from the community,” he was the first Chancellor of the Anglican Diocese of Tasmania and; a proponent of universal education, the first President of the Tasmanian Council of Education. His grand Hobart residence “Holbrook,” convict designed and in a Scottish style, is a surviving memorial.

In the sequel to An Imperfect Spy, a law professor is abducted in New York. The kidnappers demand his wife renounce her feminist views to secure his release. Sleuth Kate Fansler chooses to ignore the demand and rescue her husband herself.

Legally Chocolate : a confection of cocoa in the courts

The (amusing) ABA description of this book: “As amusing as opening a box of chocolates, this book will satisfy your sweet tooth and fulfill your craving for chocolate--and the law. It’s for anyone who has a passion for chocolate, justice, and commerce. Chapters focus on interesting legal cases or regulations relating to chocolate, using authentic, relevant, and amusing cases and references to sweeten the reader’s experience.”

The Heart in the Glass Jar : love letters, bodies, and the law in Mexico

From the back cover: “This book begins with one man’s literal heart (that of a prominent statesman in mid-nineteenth-century Mexico) but is truly about the hearts, bodies, legal entanglements, and letters—as both symbols and material objects—of northern Mexicans from the 1860s through the 1930s.

The book is a study of courtship practice and family formation. It examines love letters of everyday folk within the framework of literacy studies and explores how love letters functioned culturally and legally.”

The Strange Love of Martha Ivers

In this film from 1946, Martha (Barbara Stanwyck) inadvertently causes the death of her cruel, authoritarian aunt. Martha lies to the cops, and Walter (Kirk Douglas), who saw the crime, corroborates the girl's story. Eventually, they wed out of convenience; the meek Walter is genuinely in love, and Martha thinks that her secret is safe since she has married the one witness to her aunt's death. However, when her childhood pal, Sam (Van Heflin), shows up, Martha knows her dark past may not stay a secret for long.

A Different Justice : love and the future of criminal justice practice in America

The purpose of this work is to discover what justice would look like if it was predicated on love. Sacred sources, including Christianity, Islam, Buddhism, and Hinduism, along with the thought of scholars like Erich Fromm, Karl Marx, Simone Weil, and Paolo Freire, are examined in detail for insights into the nature of love. Space is devoted to an attempt to understand why American justice practice is so broken despite the noble work of so many.

Why Lawyers Love Golf : golf and the law

Written by an insurance law professor at the University of Western Ontario (who is also a native New Zealander). The author believes golf and the law “were made for each other,” as golf yields many situations that lead to litigation. The book discusses legal cases that involving golf and golf history and covers many areas of the law, including personal injury, property damage, taxation, human rights, intellectual property and employment law.

This book, written by a Scottish barrister in 1938, discusses the fingerprinting methods of Dr. Henry Faulds (a fellow Scot) and others. It also discusses the ancient use of fingerprints and “Mark Twain” as a “finger-print propagandist.”

Poetry and prose by A. Lincoln

Abraham Lincoln was fond of poetry and read, memorized and recited poems throughout his life. He was a poet before he became President. In fact, poet Carl Sandburg cited Lincoln as a muse. Enjoy your Valentine’s Day with sample of Lincoln’s To Rosa from 1858:

You are young, and I am older;

You are hopeful, I am not—

Pluck the roses ere they rot.

Lincoln was not the only lawyer enamored with poetry. From the back of the book: “Despite the demands of a practice undertaken without today’s modern conveniences—and electricity—many 19th century lawyers and judges in America found the time, and had the inclination, to write poetry. Includes poems by President John Quincy Adams and Supreme Court Justices Joseph Story and Oliver Wendell Holmes, Jr.”

Murder by Candlelight : the gruesome crimes behind our romance with the macabre

From the back of the book: “Sir Walter Scott, Lord Byron, Thomas De Quincey, Thomas Carlyle, and Percy Bysshe Shelley and others were fascinated by the blood and deviltry of the macabre. In their contemplations of the most notorious murders of the early nineteenth century, they discerned in the act of killing itself a depth of hideousness that we have lost sight of, now living in an age in which murder has been reduced to a problem of social science and skillful detective work.”

Noëlle Sinclair oversees the Law Library archives and rare book collections. In addition to managing the Special Collections, she also provides reference service, guest lectures in the first-year LAWR program, and teaches in the Hubbard Program.