Theodore "Ted" M. Seldin was an entrepreneur with a passion for giving back. He was instrumental in shaping the national and local legislation related to affordable and fair-housing statutes and a generous advocate of the University of Iowa and the College of Law. During his 89 years, Ted made a lasting impact on all of the communities he served.

Ted M. Seldin passed away peacefully on January 9, 2021, in his home surrounded by family.

He was well-known in Iowa and Nebraska for his successful business which he co-founded, the Seldin Co. While he had quite the reputation for real estate, he was better known for his strong social conscience and selflessness. From serving in the Air Force to dedicating much of his time to increasing the availability of affordable housing in the Midwest, he was always willing to put the needs of others before himself. We at Iowa Law are lucky to have been part of his legacy.

Seldin studied economics at the University of Iowa and received his JD from Iowa Law. After graduating as a double Hawkeye in 1955, he received his Air Force Commission and began active duty as a staff judge advocate (JAG). Though he grew up in Council Bluffs, IA, and would eventually settle in Omaha, NE, he continued serving the Iowa City community and the university throughout his career.

Ted and his wife Sarah established the Theodore M. and Sarah N. Seldin Scholarship in Real Estate Law to help law students fund their educations. He was a lead donor in the Law Commons renovation, funding the Ted M. Seldin Portico, which was dedicated in 2016. One of Seldin’s most notable projects with the university was the Mayflower Dormitory. 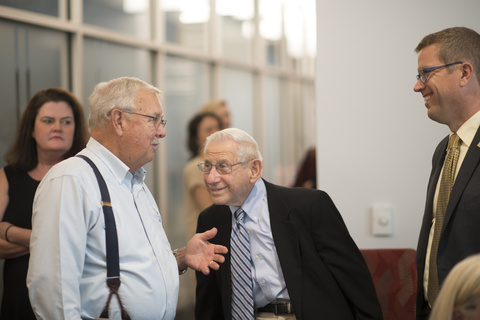 Ted proposed the idea of building a private dormitory for the university in the late 1970s. Mayflower initially housed graduate students and incoming faculty members. In the early 1980s, the university experienced a surge in undergraduate enrollment and needed additional housing for students.

“They (Seldin Co.) operated the Mayflower dormitory for a number of years and eventually transferred it to the University of Iowa,” said N. William Hines, Iowa Law Professor and Dean Emeritus. “The Mayflower dormitory has been part of the university’s dormitory system ever since.  Coincidently, until the Boyd Law Building was built in the 1980s, the overflow from Iowa's Law Library collection was stored in the basement of the Mayflower dorm.”

The Seldin Co. created affordable housing for many under Ted’s leadership. They created more than 3,500 single-family homes and 4,000 apartments. They enabled older citizens to live independently and with dignity by creating 1,000 affordable, senior-living homes across Iowa and Nebraska.

Ted’s most recognized work was likely the transformation of about 1,000 acres of farmland along the West Center Road corridor in Omaha. This was one of the first sustainable communities in the Midwest to feature single-family homes, apartment complexes, retail centers, professional offices, and sites for schools, churches, parks, and a public library.

Though this project received a high volume of recognition, Ted’s most gratifying work was what he completed with the U.S. Department of Housing and Urban Development to create programs aimed at building affordable housing for underserved populations across the Midwest. These projects have earned Seldin a lasting legacy in the real estate industry. 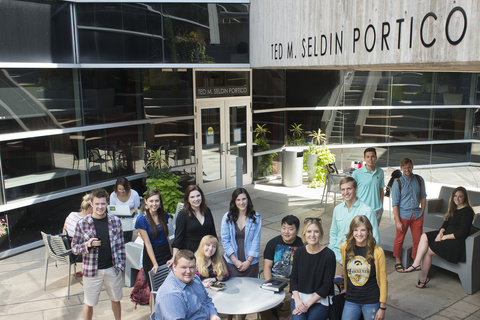 Ted received countless awards and recognitions for his achievements throughout his career. He and his wife were recognized as the 2015 Humanitarians of the Year by the Jewish Federation of Omaha. Specific to the University of Iowa, Ted was the recipient of both the Distinguished Alumni Award and the College of Law Alumni Achievement Award.

We conclude this article with a quote from Gail Agrawal, Iowa Law Dean Emerita. “The Iowa Law community lost a great friend with the death of Ted Seldin. Ted had a generous and giving spirit, assisting senior citizens with affordable housing as well as law students with scholarship support. May his memory be a blessing.”

Cathy Ralfs is a Marketing Intern at the College of Law in External Relations. She is currently studying Marketing Analytics at the University of Iowa, with a minor in Mass Communications. She is an active member of the Marketing Institute at the Tippie College of Business and will be graduating in Spring 2021. Outside of work and school, Cathy loves to stay active and travel.