In 1939, West Virginia University did not accept black students. Iowa Law did—making Abishi Cunningham’s choice for law school a simple one. Abishi ('41) was the only black student in his class at Iowa Law.

After graduation, numerous members of his class entered various branches of the military, the F.B.I. and branches of governmental administration in Washington, D.C., as highlighted in the November 1941 issue of the Iowa Law Review. Very few attorneys at the time entered the private practice side of law, but Abishi did.

After graduation he returned back to Welch, West Virginia and opened his office.

“My clientele has always been mixed, and I've always been accepted by the local community. Likewise, I've always accepted every case that came through my door, whether it be criminal, civil, or whatever,” he said in a 1990 interview about his practice in Welch.

Abishi also believed it was important to change with the economy because “when you work for working people, the economy has a tremendous effect on your practice.” He represented quite a few coal miners who were working in the largest industry in McDowell County at that time.

Abishi also became a role model to the local kids in his West Virginia community, specifically to William Redd.

Redd remembers sitting outside of Cunningham’s office waiting to see him on his way to court each day. Redd’s friends and him would pretend to hold court, and Redd would assume the role of Abishi Cunningham.

Later on, Abishi played an instrumental role in guiding Redd to Law School, where Redd eventually graduated and became an Associate Professor and successful lawyer.

William Redd shared his memories in an article in The West Virginia Lawyer (1996), closing with "The moral of the story is clear. Just like Miller, Capehart, and Cunningham, we are all role models and some kids on bicycles are watching our every move, hoping one day to be just like us."

A.C. Cunningham had two children, both of whom ended up becoming lawyers. One of those children, Marjorie Laws and her husband William Laws, recently came to visit Iowa Law with Abishi’s grandchildren.

The Laws’ family continued Abishi’s legacy. Marjorie Laws was a judge of the Cook County 2nd Subcircuit in Illinois from 1996 to 2017. Her husband William was also a lawyer and graduate of Northwestern Law. 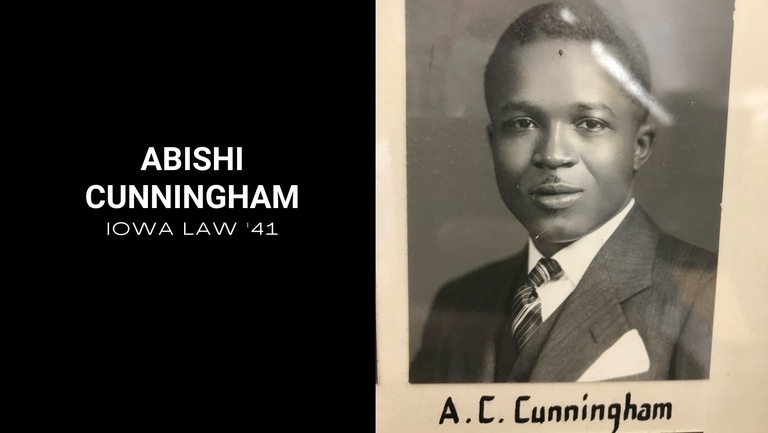 During their visit, Marjorie and her kids were able to see Abishi’s composite and explore the Law Library, while learning more about his time at Iowa Law. They also enjoyed seeing some of Iowa Law’s famous firsts, specifically the Clarks after they had learned about them at the African American Museum in Cedar Rapids.

“I’m so thankful to Jill DeYoung and the Iowa Law family for welcoming us with open arms. I realize now more than ever why this school held a special place in my father’s heart,” said Judge Marjorie Laws (Retired).

Payten Little is the Assistant to Social Media for the College of Law in External Relations. She majored in Journalism and Creative writing and graduated from the University of Iowa in December 2020. When she’s not drafting social content or editing web content, she’s writing articles for her personal blog Girl, I Get You.