Iowa Law’s DEI committee piloted a new program last week called Across the Aisle. The program seeks to bridge divides and bring people with different perspectives into conversation with each other. 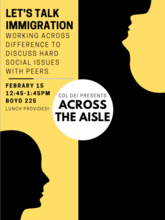 The first topic was immigration. Prior to the event participants were asked to answer questions to determine where they stood on specific issues related to immigration in the United States including voting rights, ICE, and economic implications. Participants were paired up with people who had differing views than their own. Rather than reaching a consensus, the goal was to simply replace snark with civil dialogue and help prevent avoidance of people who don’t necessarily have the same opinions. As the participants conversed throughout the event, it was hoped that they’d learn how to understand other perspectives without changing their own.

“The students, staff, and faculty who attended Across the Aisle made the event a great success. Their conversations were robust and respectful. They showed that UIowa is a place where deep disagreement can coincide with the mutual recognition that we are all doing our best to understand a complicated, far-from-perfect world,” stated Mihalilis Diamantis, the Iowa Law professor who organized the event, “My motivation was to promote a mutual understanding even beyond disagreement, to open a space for conversation and possibly even compromise.”

Inspiration for the event came from a similar one at George Mason University’s Antonin Scalia Law School called the Public Discourse Project led by Joann Koob, an assistant professor and director of the Liberty and Law Center. Iowa Law was fortunate to have Koob present via Zoom last week to explain the rules of discourse and be there to help moderate the first Across the Aisle event.

“I want the students to engage with a spirit of learning and reservation of judgement. I have a lot of confidence in our students’ ability to take on difficult topics and have a serious and deep conversation about them,” expressed Professor Diamantis.

Here is what participants had to say:

“When someone disagrees with you, it is instinctual to assume bad faith on their part. Humans tend to assign the worst motives to those that don't share their views. When disagreeing with someone face-to-face, it becomes apparent that the person you are talking with is a person who also holds their beliefs in good faith. Not only is this realization conducive to better and more productive conversation, but it reminds us that those that hold views contrary to ours are also human beings. More generally, it is hard to hate someone to their face, so face-to-face interaction is an overall positive for society.”  Layne Tieszen (1L)

“I think in an educational model like law school it can be quite easy to get wrapped up in a ‘bubble’ of law students and legal academics. Programs like Across the Aisle are invaluable in helping students stay connected to the real-world impacts of the systems we are studying, as well as providing a respectful, productive, and accessible platform for perspective-taking.” Madeline Meylor (1L)

“As a staff person, I was pleased to engage with a law student on an issue that affects us all. We shared our positions, had some good give-and-take, and I came away with a greater appreciation for that person’s perspective.”  Ted Potter, Reference Librarian and Adjunct Lecturer in Law

“It was wonderful to learn about my interlocutors' personal experiences, which obviously informed their beliefs and knowledge. Until this event, I hadn't thought about how my experiences might determine not only what lessons the world forces upon me but also what lessons I seek out. There's no better way to learn about yourself than to discuss a difficult problem with someone who disagrees.”  Timothy Terhaar (2L)

“I think in-person conversations like this humanize the other side, whether in your favor or not. Online conversations add a layer of separation to your opposition, and people forget that opposite viewpoints are in our classes and groups. Without that layer of separation, people tend to be less radical and more willing to listen. I appreciate the opportunity to listen to someone's thoughts and experiences to help me understand their thinking.”  Adara Opiola (1L)

"Without these conversations we may never understand antithetical ideas. Speaking to other people helped me see why they have differing perspectives, what they may be missing, and a bit of where my own core beliefs stem from. I also believe these conversations help move someone vacillating between opinions to become more educated, exposed to new ideas, and more likely to be open to new positions.

These conversations are less prevalent than many would believe them to be in law school. Where they do happen, they are often confined to a precise issue in class or else not in an environment where these discussions can be thoroughly fleshed out. Having an uninterrupted hour of discussion was refreshing and the information and prompts shared bolstered the conversation."  Hassan M. Ahmad (2L)

Following the success of the first event, the program looks to continue with a second event in April 2022.