Every fall the Office of the Vice President for Research announces the Research Scholar of the Year award to recognize important and high impact work. 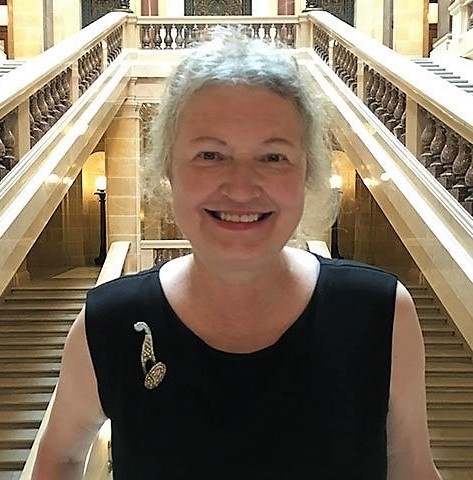 This year, Lea VanderVelde, professor of law and the Josephine R. Witte Chair, was named 2022 Scholar of the Year. Also earning this recognition in 2022 is Gregory Howes, a professor in the Department of Physics and Astronomy. The award celebrates nationally recognized achievement in outstanding research and scholarly/creative activities by faculty members within the previous 24-month period.

Along with having innovative work published in the nation’s leading law reviews, VanderVelde has authored five major books, two history monographs, two leading casebooks, and a primer for text analysis. One of those books includes the groundbreaking biography, Mrs. Dred Scott: A Life on Slavery’s Frontier, which tells the story of the nation’s most infamous lawsuit. This book was the first of a new genre, biographies of illiterate persons whose lives nonetheless had changed history.

VanderVelde has engaged in several initiatives to advance civil liberties and end modern slavery, authoring several amicus briefs and nominating Kailash Satyarthi for the Nobel Peace Prize. Her research focus on how our current American law of civil rights and civil liberties were formed during the 19th century also brings light to the Thirteenth Amendment’s potential for addressing current civil rights issues. Having pursued digital research technology, The RAOS project, which she started more than 20 years ago, has successfully digitized the Congressional debates from 1863 to 1873 and The Territorial Papers of the states of the Northwest Territory, and spawned more research.

Lea VanderVelde was the Guggenheim fellow in Constitutional Studies for 2011, the May Brodbeck Humanities fellowship for 2019, and 2020 winner of the Brophy prize for best article in legal history published in the American Journal of Legal history. She is also a life fellow of the American Law Institute, where she was active in the Restatement of Employment Law and the Restatement of Agency, and an OAH Distinguished lecturer.