This fall, Iowa Law welcomed the Class of 2025—going head-to-head with last year’s class as the most academically qualified first-year students in school history.

“Applications to law school for this year’s entering class were down significantly across the country (-11.7%) and even more in our region (-15.4%). Yet Iowa Law brought in a very strong class academically, with the same median LSAT score as last year’s entering class and almost as high an undergraduate GPA. While last year’s class was the best academically in the history of Iowa Law, this year’s class was very close. If it was a foot race, the officials would have needed to check the photos to see which class finished in first place. We are lucky to have both of these outstanding classes in the Boyd Law Building,” said Dean Kevin Washburn. 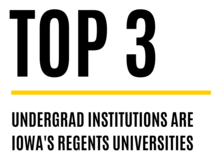 Iowa Law’s incoming class represents 25 states, 3 foreign countries, and 72 undergraduate institutions. The top three undergraduate institutions are Iowa’s Regents universities: the University of Iowa, Iowa State University, and the University of Northern Iowa, together comprising nearly 30% of the class. The distinction of Iowa’s Regents universities in the top three is a result of the college’s efforts to keep top talent in the state of Iowa.

What’s especially remarkable about the incoming class is the breadth and depth of the individual backgrounds, abilities, and experiences. Amy Best, director of admissions at the College of Law, noted these attributes during her introductory remarks at the first-year student orientation.

“You have attorneys in your family.

You have doctors, nurses, dentists, therapists, and other medical professionals in your family.

Your hobbies and jobs include the Irish Parliament, chemistry professor, photographer, cheesemaking.”

The diversity among students at Iowa Law has historically fostered a learning environment where every idea is taken seriously—where each class is energized by the exchange of ideas and the collection of multiple perspectives. The 2022-2023 academic year has already proven to be no different.

Yang Yang, an incoming Advanced Standing student from Beijing, China, says he already feels connected to the Iowa Law community. “I really appreciate that even though my classmates and I have completely different backgrounds, we’re still able to relate to each other because of the shared values at Iowa Law.”

The incoming class not only demonstrates outstanding academic success but also represents the civility and collaborative work ethic of Iowa Law’s close-knit community. During the heart of the COVID-19 pandemic, many of these students served as vaccination clinic volunteers, contact tracers, and task force members.

With the College of Law’s mission to serve the people of Iowa, the nation, and the world, it’s safe to say the class of 2025 is off to an unforgettable start.