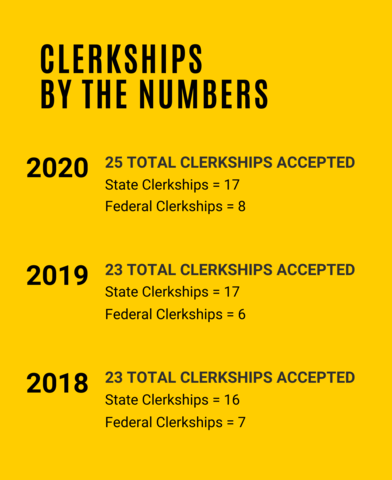 If you turn on a television and flip through the channels, you’re likely to come across one of the many television shows that portray the fast-paced, intense life of attorneys. From staple shows like Law & Order to newer programs like For the People, this particular attorney lifestyle portrayal is a popular choice for television writers, producers, and network executives alike. And while the stars of these shows are often litigators or judges, there’s another critical participant in the legal field that, although unlikely to be the star of the next hit legal television show, is crucial to the development and practice of the law.

A judicial clerk is an attorney that works for, and closely with, a judge. Clerks typically provide legal research, draft opinions, and provide general assistance to their judge or court. Although the law clerk won’t see their name at the end of the judicial opinion that they may have played a role in researching and drafting, their work is critical.

Working under the tutelage of a judge provides several benefits to law clerks. The opportunity to refine your legal research and writing under the close supervision of a judge is something many law clerks appreciate precisely because of how rare it is. However, some of the biggest takeaways attorneys point to from their time working as a law clerk extend far outside of the legal field and into lessons of life.

Kara Westercamp (Class of 2009) clerked for Chief Judge John A. Jarvey of the United States District Court of the Southern District of Iowa from 2009 to 2011. “The most memorable part was how supportive Judge Jarvey was” Westercamp says. During her clerkship, Westercamp had the opportunity to examine complicated cases and act as a “court deputy” which allowed her to observe talented trial lawyers in action. Westercamp noted that her writing improved greatly under Judge Jarvey's watchful eye and her confidence as an young professional greatly improved. “Working in a clerkship is really unparalleled and can help launch your career” says Westercamp. “But for me, what has become more important than even the professional benefit of the clerkship, is the lifelong friendship you can establish with your judge.”

Clerking may not be as glorified as the litigation attorneys and judges in media portrayals, but it’s something Iowa Law has been focused on for years. Iowa Law’s longstanding Clerkship Committee is dedicated to highlighting the benefits of clerking and encouraging Iowa Law students to apply for both state and federal clerkships. Both before and after the institution of the Committee, Iowa Law students have continued making their way to clerkships on the state and federal level, including state supreme courts in Iowa and Minnesota, and Federal Courts of Appeals, which function as the stop immediately before the highest court in the land, the United States Supreme Court.

One such student is Drew Driesen (3L) who recently received a position for Judge Colloton on the U.S. Court of Appeals for the Eighth Circuit in the state of Iowa.

For Driesen, accepting his clerkship was a simple decision. “I see my clerkship as a bridge between the abstract theory of law school and the concreteness of working with my own clients and their legal issues” Driesen says.

Driesen is interested in federal appellate work and is excited to gain valuable experience while staying in his home state of Iowa. “A clerkship gives me the opportunity to get a feel for the inner workings of a court, and to see from a decision maker's perspective what works and what doesn't” says Driesen.

For Emani Marshall-Loving (3L), the ability to observe the judicial process was what attracted her to apply for a judicial clerkship. “I am looking forward to getting exposed to a variety of substantive and procedural legal issues. I believe that this exposure will help me become a well-rounded attorney” Marshall-Loving says.

Using the most recent employment figures from the Class of 2019 job outcomes proves that Iowa Law continues to successfully place its students in prestigious and valuable clerkship positions. Iowa Law’s 16.4% of students entering judicial clerkships was ranked first in the state, 6th in the Big Ten Conference, and in the top quarter of all American law schools.1

Marshall-Loving was offered a coveted clerkship for the Iowa Supreme Court and will be working closely with Justice Dana Oxley after graduation. Justice Oxley is an Iowa Law alum and after graduating in 1998 she clerked for clerked for Judge Hansen on the Eighth Circuit for several years before becoming a judge.

“Students should pursue judicial clerkships because they are a great way to get experience working closely with a judge and hone their legal research and writing skills,” says Marshall-Loving.

Adam R. Lorenzana is a 3L at Iowa Law. A Long Island, NY native, Adam attended Georgetown University for his BS and MA, graduating in 2014 and 2017, respectively. This past summer Adam was a summer associate with the NYC office of Willkie Farr & Gallagher, where he will return to practice corporate and transactional law upon graduation.